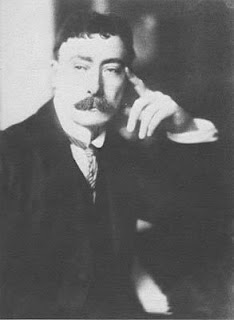 "Francis Grierson died last night. I sent DeWitt down a few weeks ago with an earnest invitation for him to come to Mission Inn as my guest, with the same thought that you have written me. It is well for the dear man to go as he has."
The telegram stored at the Riverside Museum tells it all. A concert piano/mystic turned author, another author, and the owner of one of Southern California’s most beautiful gems, the Mission Inn. All intertwined and the final crescendo of this musical piece ends in the death of pianist. A telegram tells the end well, but let us talk of the beginning. Not of Francis Grierson, but his former self, Jesse Shepard.
Benjamin Henry Jesse Francis Shepard was born in Birkenhead, England in September 1848. The following year his family moved to America, to Illinois. By 1863, his musical talent is being honed in New York and by 1869, he’s performing in the salons of Paris and London. In 1871, Shepard is residing in St Petersburg, Russia. Performing musical concerts and it is believed he will start performing seances. In October of 1874, he is performing seances with H.P. Blavatsky in Vermont. 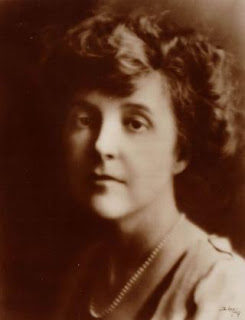 In 1887, Jesse Shepard will come to San Diego with his friend and business manager Laurence Waldemar Tonner, and under Shepard’s design inspiration, The Villa Montezuma was built. For the two years that he lived there, this magnificent Queen Anne Victorian Mansion was filled with poetry, literature and music as Jesse Shepard became the model of high- brow entertainment in this booming Victorian town. It is also in this Palace of the Arts, Jesse Shepard will start his career in writing. His articles and essays are first published in the Golden Era, a magazine that was originally published in San Francisco but moved their publishing headquarters to San Diego in 1887.
By 1890, Jesse has left San Diego and went to Europe, meeting royalty and playing the piano for patronage. He crossed the Continent many times but it will be London which he will call home in 1896. There he is will publish Modern Mysticism under his pen name and alter ego, Francis Grierson. In 1913, Shepard/Grierson will return to the states where he will perform recitals and continue to write and lecture on Theosophy. His final home will be Los Angeles in 1920. 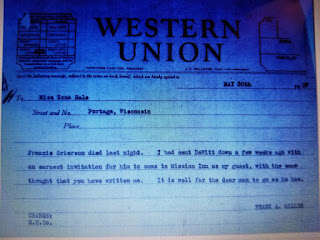 In March, 1927, he will have the most enthusiastic house guest, Zona Gale. Gale, having arrived at the Mission Inn, heard of Francis Grierson’s fascinating career as a musician and writer and how several times he performed at the Inn’s cloister music room. She wrote him, announcing that she would be in Los Angeles soon and begged for an audience with him so she meet him, and finishing the letter with, “I hope that I may include an hour when you will play for me.” They met March 5th, and even though it was brief, Gale was impressed with aging artist and was greatly distressed when she heard from Frank Miller upon her return to Portage, Wisconsin that due to his health, he could not perform at the Mission Inn for Easter. She urged Grierson in a letter to accept Miller’s offer.
"I am deeply disappointed that Mr. Miller writes me you are not to be at Riverside for Easter. He wrote ‘Can you not back up my invitation in a way that will induce them (Grierson and Tonner) to accept?’ That service, as you know, is very wonderful. You would be Mr. Miller’s personal guests, would drive up the mountain at Sunrise in their car and would have the day there."
Gale also found that Grierson was financially impoverished and so sent him a check for one hundred dollars. As she sent the check to Grierson, she sent this letter to Frank Miller. 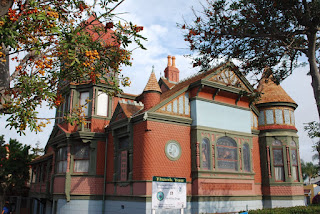 "My Dear Friend, I have hesitated to send this letter, because sends you such letters. But I seem to have no other choice.
Because, of course, the situation haunts me. I already sent one of the circulars about Mr. Grierson to two Los Angeles friends, and to Mrs. Edward MacDowell, whom I hoped would arrange a benefit dinner for Mr. Grierson. And they may do so, I still hope. And now I am sending you a copy of this letter, the original of which goes to you, to the Author’s League, who may be able to do something. And I am sending him something small directly, as I thought to do, and hesitated to do, until this letter came.
But what I am thinking boldly is this: Whether whatever else I am able to collect might be sent to you in return for a corner in the hotel, for Mr. Grierson and Mr. Waldemar Tonner, who acts as a kind of good-angel-without-money to him, and has for years been with him. One room and the food—but most of all the Inn to roam in, and the piano to give what he has to give to whomever knows and loves—well of course this is like asking for heaven, until I know what I can get together. But will you take the chance? Let me send you all that I can assemble, and gamble with me on the outcome?"
She continued in the letter telling more of Grierson’s exploits and his writing ability as well as informing him of the check to take care of his most immediate needs.
The dinner and concert was arranged for May 29th, shortly after her letter went out. Thirty people were invited for a recital from the great and mystical Francis Grierson. He spent the evening playing his piano and talking to his guests about his experiences in Europe. What happened next is best described in a letter from Tonner to Gale.
He turned to the instrument and announced that next and last piece of the evening would be and Oriental improvisation, Egyptian in character.
The piece was long, and when it seemed to be finished he sat perfectly still as if resting after the ordeal of this tremendous composition. He often did that, but it lasted too long and I went up to him—he was gone!
His head was only slightly bent forward, as usual in playing, and his hands rested on the keys of the last chord he had touched.
There had not been the slightest warning. He had seemed to be in usual health (he always had some indigestion), he had eaten well to gain strength for the evening, and he had been smiling and laughing with the company even a few moments before he passed away.
Zona Gale, upon hearing of Grierson’s passing, wrote Tonner and confessed that she thought daily how she had a hand in his death in urging the concert to happen. Gale and Miller will continue a friendship until his death in 1935. In 1938, Gale will publish Frank Miller of Mission Inn and will pass late that same year.
Labels: Stories
Newer Post Older Post Home